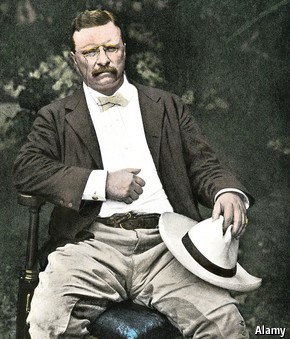 Teddy and his Montecristi

HATS have been woven in and around Montecristi, a hillside town in Ecuador near the Pacific Ocean, since as long ago as the 17th century. Locally the cream-coloured titfers, which are made from the soft fibres of a palm-like plant, are called toquilla-straw hats. To the rest of the world, however, they are known as Panama hats. Now Ecuador wants to reclaim the brand.

The hats became known as “Panamas” because that was where they were primarily sold to international markets. By the 1840s Ecuadorean entrepreneurs were sending them to Panama in the tens of thousands. Prospective gold-diggers bought them as they crossed the isthmus on their way to California. Theodore Roosevelt helped make them fashionable on a visit, in November 1906, to see the construction of the canal (which opened in 1914).

The hats fell out of favour in the second half of the 20th century, but data from Ecuador’s Central Bank suggest demand is rising. The country exported finished hats worth $6m in 2013, up from a piffling $517,000 in 2003. The headwear goes mostly to Italy, Britain and the United States, where they can fetch anything from a few dollars to several thousand for the most intricate designs. According to Andrés Ycaza of the Ecuadorean Intellectual Property Institute (IEPI), a skilled weaver will earn only about $800 for a hat worth close to $2,000, which can take months to make. Without a premium attached to its Ecuadorean origins, it is hard to drive prices higher.

Mr Ycaza’s answer is to try and promote the hat’s roots. In 2012 the weaving of the toquilla hat won a place on UNESCO’s list of “intangible cultural heritage”. Now IEPI is trying to gain protected designation-of-origin status for the Montecristi hat in trade negotiations with the European Union, which protects everything from Roquefort cheese to Isle of Man Queenies, a type of scallop. “This is the moment to make it known to the entire world that the Montecristi hat is made here in Ecuador,” says Mr Ycaza.

The idea hasn’t won universal support. Although Montecristi is home to 500 or so weavers, the city of Cuenca in the southern Andes produces and exports most finished toquilla hats. There they worry that the Montecristi brand won’t much help them. “If a weaver from Manabí [Montecristi’s home province] for whichever reason moves to Cuenca, the hat he makes in Cuenca isn’t going to be worse than the one he weaves in Manabí,” says Gabriela Molina of Homero Ortega, a family-owned hatmaker.

From the print edition: The Americas